There may be spoilers for the first 3 episodes of Breaking Bad. Reader discretion is advised.

For years in the television industry, there has been one king. You could argue that Game of Thrones delivers the shock deaths, and The Walking Dead that provides the gory violence, but one show managed to include all of this, while still telling a meaningful and powerful story. This show is Breaking Bad.

Before December 2014, I had never watched an episode of Breaking Bad, but I do know people that have devoured it on Netflix or the DVD/Blu-Ray releases. Luckily, I managed to avoid most spoilers, but unfortunately a few plot points have been given away, but they were a little bit obvious anyway when considering the show’s plot. For this reason, I went in to my first episode of Breaking Bad mostly blind, aside from the synopsis on the DVD and the IMDb description. The opening 5 or so minutes – completely without dialogue (as far as I can remember) – are tense and thrilling, even when the viewer has no idea what is going on.

The viewer is thrown in at the deep end, and they are left to put the pieces together and actually think, which, in the days of trashy shows like Keeping Up With the Kardashians, there is very little for people that want to analyse what they have just seen, making it an immersive and thoroughly enjoyable experience. Take, for example, episode 3, …And the Bag’s in the River, where Walt hurriedly pieces together the shards of a smashed plate to see if his hostage, Krazy 8, was going to try and kill him, just after the chemistry teacher-turned-meth cooker had poured his heart out to him. It is never explicitly mentioned what he is doing, but it is left up to the viewer to put 2 and 2 together to figure out what is going on.

Another spectacular factor is the show’s lead, Bryan Cranston, as Walter White. Even in just the first three episodes, his character changes, his actions become more serious and his mental state deteriorates. In episode one, Walt is hit with a bombshell when he finds out he has terminal lung cancer, with only 2 years to live if he opts for chemotherapy. At that moment, he is weak, finding himself shouted down by wife Skylar, and the butt of the jokes of his chemistry class. But that all changes when he makes a decision to start cooking crystal meth, with one of his former students, Aaron Paul’s Jesse Pinkman, selling. Even at this point, the character has already changed so much, and by the end of episode three, when Walt has killed Krazy 8, the man we see now is a far cry from the feeble teacher that took a second job to support his family.The show not only succeeds with its main man, but the supporting roles are just as charismatic and complex. Aaron Paul as Jesse Pinkman, Anna Gunn as Skylar White, and Dean Norris as Hank Schrader are particular standouts, all feeling real and believable.

So far, I am in love with Breaking Bad. The sharp, witty writing, the powerful and emotional acting and the thrilling and tense plot all equate to a brilliant show. Some people call Breaking Bad one of the best shows ever, and so far, I can’t argue. 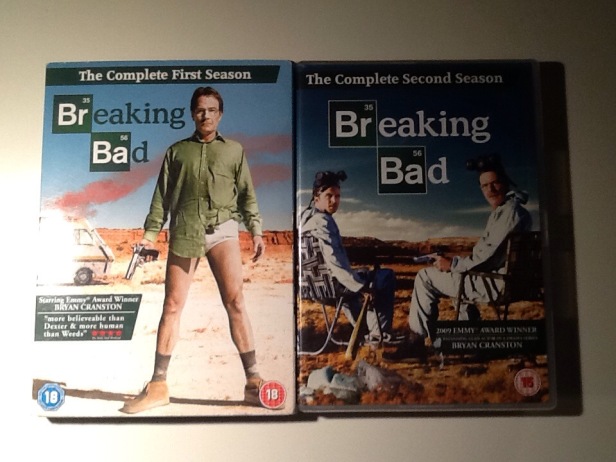