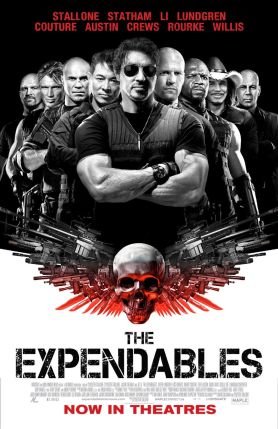 In the 1980s and 1990s, action films were the big thing. With ground-breaking films such as The Terminator and Die Hard releasing during these decades, household names were made out of actors such as Sylvester Stallone, best known for his Rocky films, Arnold Schwarzenegger, famous for being the T-100, and Jet Li, famed for his martial arts performances. Although the reputation of these actors may have fallen in recent years due to poor performances and dismal acting, the prospect of seeing such legends fight together on one screen made a film buff drool at the mouth. And in 2010, their wish was answered by The Expendables.

Sylvester Stallone stars as Barney, the leader of a group of rogue fighters known as the Expendables, who are hired by the US government to take out the dictator of the small island Vilena, and the US businessman who pulls the strings of this tyrant. Joined by Lee Christmas (Jason Statham), Yin Yang (Li), Tool (Mickey Rourke) and other actors such as Terry Crews and Randy Couture, and with the help of US agent Mr. Church (Bruce Willis), the Expendables must infiltrate Vilena, figure out who’s pulling the strings, and liberate the island, saving the day once more.

As normal with action films, the plot of The Expendables definitely isn’t where it soars. Aside from a pretty generic task of liberating an island ruled by a dictator, the plot doesn’t really go much further. It’s heavily prevalent throughout that this film is more focused on action rather than any form of story, although with actors such as Sly Stallone and Dolph Lundgren helming the project, it’s clear that we weren’t going to get many character moments, but by not including these it just makes the film all the more generic. As more and more contemporary action films start improving their plots – with films such as Speed and Non-Stop delivering deeper stories than before – it allows this film to lag behind quite substantially. It’s clear that this film is aiming to emulate 80’s and 90’s action movies, but by sticking so closely to that formula, it lags behind in the constantly changing action movie market, where plots now matter. There’s quite a few gaping plot holes that also drag the film down, although it baffles me that a film with a premise as rudimentary as The Expendables manages to let these elements slip in. However, one of The Expendable‘s biggest sins is its blatant attempt to introduce plot strands to be used in future films. When Arnold Schwarzenegger pops up – one of action’s biggest stars – I began to feel elated, although my euphoria was short-lived after Arnie exits the scene and is never seen again. However, we do know that he pops up in future films, so it’s disappointing that – like lots of the best classic action films which this tries to emulate – the plot couldn’t be coherent on its own.

The main issue is that we don’t care about any of the characters since we are plunged straight into their world without knowing very much at all. The only character that gets a decent arc – or any character development at all – is Statham’s Lee Christmas, who has to deal with his wife’s adultery. This gave Statham the chance to deepen his performance, which he certainly takes, and although it’s not award-winning, he puts in a solid innings, with his character definitely the most three-dimensional. Unfortunately, he appears to be the only one that gets any time devoted, so the rest of the characters come across as shallow and one-dimensional. The worst sinners here are Randy Couture and Terry Crews’ characters, who are barely given any lines of dialogue and hardly appear in the action. That said, none of the actors here are particularly terrible: yes, the performances are cheesy and hammy, but as an ode to late 21st-century action, that’s just how it should be. The group also banter quite well with each other, with a couple of pretty funny jokes resulting from conversation between the Expendables, but a few of the jokes do miss the mark, which felt a bit awkward. I did, however, take issue with some of the portrayals of women in this film, mainly because the few women we see are either sleazy, adulterous or incapable of defending themselves. In The Expendables 3, UFC fighter Ronda Rousey joined the cast, which at least shows that the makers have learnt their lesson.

But, of course, nobody – including me – really came to see The Expendables for tangible protagonists and a deep, character-driven story. The one reason people saw this film was for the action, but aside from a few glaring issues, it doesn’t disappoint. First things first, The Expendables is gory – I mean really gory – with decapitations, disembodiment and gruesome deaths very frequent. It really took me by surprise how gory this film was, especially when considering that the third entry in this franchise is PG-13 (or 12 in the UK) compared to the hard R (18 here) that this film received. That said, I thought the action was brilliant, with the novelty of seeing such legends fight alongside each other never really wearing off in what is quite a brisk action romp. Some of the action scenes, particularly the first car chase and the climactic battle, feel really high-octane and are truly fantastic, making it hard for me to tear my eyes away from the screen. Despite the near-perfect action though, there were a couple of issues with these moments, most notably the CGI, with the blood looking awful and the fire looking horrendous. Aside that, though, I adored the action in this film, which is what matters most in an Expendables movie.

From a technical standpoint, the film is pretty average. Sylvester Stallone’s direction really isn’t brilliant, with a few beautiful establishing shots marred by some really poor close-ups that feel claustrophobic. However, the biggest mistake is the inclusion of the dreaded shaky-cam, which although infrequent, completely ruins the scenes it is used in. Sound editing, on the other hand, is really well done, with the impact of explosions and bullets flying really coming off nicely. The score is also quite good, albeit quite forgettable, but during the film’s action scenes it does a good job of ramping up the tension. Dialogue is forgettable and quite expository, but as with the plot and characters, that’s not really the film’s point.

Yes, the script is expository, the acting isn’t brilliant and the plot is paper-thin, but The Expendables wasn’t trying to succeed in any of that. All it wants to be is fun – and thanks to fantastic, gory action sequences, good music and brilliant stuntwork, when the bullets go flying The Expendables soars. Citizen Kane this is not, but it’s a damn good 80’s action movie throwback regardless.