Instead of a film review this week, I’ve decided to build up to the heavily-anticipated Batman v. Superman: Dawn of Justice by taking a look at the only official prequel novel for the film, entitled Cross Fire. Yes, it’s aimed at children, but is it worth taking a look at if you can’t wait to see the Caped Crusader and Man of Steel battle? 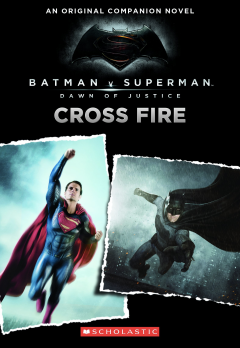 Probably the first thing I should mention regarding this book is its target audience: if the fact that Scholastic is publishing doesn’t give it away, this is definitely a book geared towards the younger fans of these characters, and as such it does lack in depth somewhat. There’s a number of sub-plots going on here, but one of them does follow a pre-pubescent boy during his time at elementary school, definitely the demographic this is aimed at. It doesn’t ruin the book because some of the context we get in this book is clearly going to have an impact on the film when it comes out. It’s not necessarily a problem, but if you’re looking for a deeper, more character-driven and mature plot, perhaps this isn’t for you.

For what it is though, Cross Fire does tell a rather interesting story. The eponymous heroes never meet, but we do see them in both their public and private guises, giving us a pretty good grounding of how their characters will be portrayed in the film and how their relationships with other characters will go. The villain of the novel is Doctor Aesop, a niche Batman villain that mainstream fans no doubt will not recognise, which allows for the writing to focus on our heroes and allowing the villain’s arc to complement this. Its loyalty to the lore established in Man of Steel is admirable as well, with a number of plot elements deriving directly from the consequences of the 2013 saga-starter, although I won’t reveal them here.

Another thing that’s worth talking about is the action described in the book. It’s definitely faithful to Man of Steel when Superman gets going, and the glimpses of fights that we’ve caught in trailers, especially the brutal hand-to-hand and gadget-based combat the Caped Crusader will no doubt capitalise on. The action scenes are really well described by author Michael Kogge, and at times the stakes are pretty high: obviously neither Batman nor Superman were going to die in this novel, but there were times where you really had to admire how they got out of some situations, which, for a plot revolving around unmanned drones controlled by a mad scientist, is pretty great.

One of the main problems with the novel, however, is the imbalance between Batman and Superman. Hopefully something that won’t resonate to the film, we see a lot more of the Dark Knight than the Man of Steel, with Clark Kent doing a lot more work in his reporter mode than with his Kryptonian drapes on. Batman has a lot more to do in the cape and cowl, and there’s even a few existential lines here: ‘Batman could only imagine the teasing this creature must have endured… was Batman any different?’, which wonderfully portrays the darker subject matter of this novel and the psyche of Ben Affleck’s Batman. Superman, however, is barely in his outfit until the Aesop situation is handled, though I will say that Clark is brilliantly written, with his dialogue with Lois Lane and Perry White some of the novel’s highlights.

It’s really quite hard to go into my usual detail on a hundred-page book aimed at those substantially younger than me, but, despite this, I did enjoy reading Cross Fire. It tells a compelling, albeit unbalanced story that helps flesh out the world established in Man of Steel and give some grounding to what will soon unfold in Batman v. Superman: Dawn of Justice. There’s definitely an imbalance between the two heroes, but both have their moments where they shine excellently and are portrayed so accurately that it’s hard to penalise it: Batman sells more toys than Superman, so Warner Bros. are clearly going to have the emphasis on the biggest earner of the two. It’s not necessarily a deep or layered story, but, as long as you go in knowing it won’t be the richest superhero prose you’ve ever read, and you remind yourself it’s for children, you’re sure to have a good time with Cross Fire.